Ordinary Grace. The title is only the first perfect thing about this novel. The story follows a family of damaged characters, rooted in faith, through the summer of 1961, when typical and extraordinary events occur in their rural Minnesota town.

My Favorite Point of View

Our main character and narrator is Frank Drum, currently 53-years old, who tells us the story of the summer he was 13, a summer filled with death. This removed-by-time 1st person perspective is one of my favorite points of view! One of my favorite novels, Out Stealing Horses by Per Petterson, and one of my favorite short stories, “The Man in the Black Suit” by Stephen King, both share this perspective of an older man looking back on his childhood. When done right, it strikes the perfect balance of emotionally connected to the story but removed enough to not let the emotions rule the storytelling.

The Heart of the Novel

“And even in our sleep pain, which cannot forget, falls drop by drop upon the heart, until, in our own despair, against our will, comes wisdom through the awful grace of God.” – Aeschylus, Greek playwright

The phrase “the awful grace of God” appears in the beginning of the book and is fully described near the end of the book in the full quotation, explained by Frank’s father, the local preacher. The author, William Kent Krueger, said the originally titled of the book was Awful Grace but he realized Ordinary Grace was a “more gentle and more appropriate title. Much more inviting to the reader.”

An enriching story about real life and untimely death. Filled with memorable, flawed characters. Written is a clear, comforting voice. Set in a world that feels far away yet so close to the heart. Ordinary Grace is a story well worth reading.

The Devil in the White City book review

“Murder, magic, and madness at the fair that changed America.” That is the slogan on the cover of this outstanding piece of historical non-fiction.

This New York Times quote explains it well, “A dynamic, enveloping book…Relentlessly fuses history and entertainment to give this nonfiction book the dramatic effect of a novel…It doesn’t hurt that this truth is stranger than fiction.”

The “Devil” refereed to in the title is Dr. H. H. Holmes, a serial killer active in America in the late 1800’s. Holmes used Chicago’s 1893 World’s Fair, aka the White City, to lure young women into his life whom he charmed, often building long-term romantic relationships with, then murdered. Not only did Holmes use his charming persuasion, and vicious cunning to murder quietly, he also used it to build a small empire, with a small fortune. His story is certainly intriguing, but its only a small force in the attraction of this entire book.

Although the two men never met, Holmes shares the spotlight of the novel with a great architect of the time, Daniel H. Burnham. Burnham was the lead designer of the World’s Fair, an event “largely fallen from modern recollection but that in its time was considered to possess a transformative power nearly equal to that of the Civil War.” 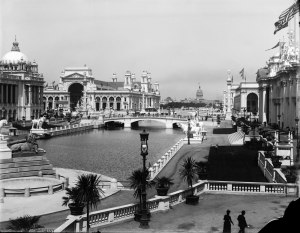 Larson paints a vivid picture of the World’s Fair from more viewpoints than you’d perceive possible. From the main attractions to the (many) near downfalls, you will close this book knowing the World’s Fair of 1893 was one of the most spectacular events in history.

While so many historical nonfiction authors are not, Erik Larson is a story teller. The story drops teasers like a suspense novel, builds character like literary fiction, and weaves multiple story lines better than most novels in any genre. Quotes are woven in with ease, building the plot and strengthening historical accuracy with each appearance.

The Devil in the White City is by far the best piece of historical nonfiction I have ever read. I recommend it to anyone who 1) loves history, 2) loves a murder mystery, 3) is interested in American history or the history of Chicago, 4) is fascinated by architecture, 5) who knows nothings about the World’s Fair, and 6) anyone who simply loves a good story.

10 Ways to Structure Your Novel

There are endless ways to structure a novel; the only limit is your imagination! Below I’ve compiled a list of novel structures that I’ve run across recently. Although I tried to keep point of view separate, the two are often very intertwined. Click on the links for more details on the structure from previous book reviews! Please add your favorite/unique structures in the comments below!

Pros and Cons of Reading Multiple Books at Once 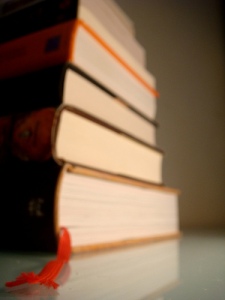 In the past, I have always been a 1-book-at-time gal and enjoyed it that way. For the past few years, I’ve gotten into reading two books at a time, one in paper and one on audiobook. I’m naturally a focused individual, not the greatest multitasker. Focusing on one thing at a time helps me get things done faster and to better quality. Thankfully, my mind can separate my paper book from my audiobook quite easily BUT I never read two paper books at the same time. If I begin a new book while in the middle of another, I’m unlikely to ever pick up that original book again.

I have always been hesitant to quit a book. I don’t like quitting (or taking breaks) in the middle of projects, whether its reading a book, mowing the lawn, or writing a story. But lately, I have encouraged myself to be more open to deserting bad/uninteresting books. There are too many great books out there to waste my time on something I’m not enjoying or learning from.

See my previous post on the subject, When to Drop a Bad Book.

Pros and Cons of reading multiple books at once, compiled from random blogs/articles:

Flexibility – Being able to read more than one genre/story/author at a time. Choosing the book that matches your current mood.

Portability – Some books are more easily slipped into a purse or bag. 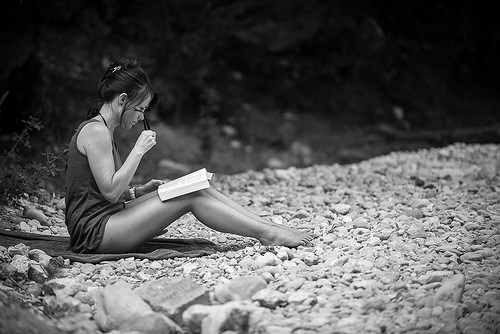 Split focus – As I am constantly deciphering the writing as well as the story, this is a huge disadvantage for me. I like to study the arch and structure and consistency of the voice while reading a book and switching between multiple books would make this difficult.

Memory – The more books you read, the harder it is to retain all the information you’ve read. If you leave sit too long, you may forget what is happening.

Less invested – Personally, I’m less likely to get enchanted by a story and its characters if I’m juggling multiple stories.

Encourages Short Attention Span – Reading is one area that still requires concentration on one thing for a long period of time. Reading multiple books at once will drop reading into the I-need-it-NOW-and-QUICK culture.

Posted in A Writer's Life

A true detective story from Stephen King, where the only extraordinary strangeness is a human psychopath. King referred to Mr. Mercedes as his “first hard-boiled detective tale.”

A young, disturbed man steals a Mercedes and rams it through a crowd, killing eight innocent people. Months later, after the case has gone cold, the detective receives a letter from someone claiming to be the Mercedes Killer. Now retired, Detective Bill Hodges quietly takes on the case and unravels a dangerous, unpredictable series of events.

The point of view switches between the two main characters, the detective and the psychopath killer, making the suspense not who is the killer, but will the killer be stopped. The direct interaction between the two is limited to online letters. Knowing both parties motives, plans, and speculations gives the reader a lot of power; the reader knows everything while they watch characters speculate.

It could very well deserve more stars but I’ve been overloaded with King novels lately and the style and suspense becomes too redundant to fully enjoy. Don’t get me wrong, I love Stephen King and I enjoyed and recommend this book, but it didn’t capture my full attention.

The land of children’s literature is a vast and fascinating space that I have so far neglected on this blog. Today is the day that will change. Although its not my specialty, I don’t want this blog to be so narrowly focused that I avoid talking about great books, no matter what the target age level. And children’s books and not limited to entertaining children. If they did not also fascinate adult readers, who would buy them and who would read them to children?

Without further ado, my (current) favorite children’s book is…

A love story at heart, this book and Morris Lessmore uncover the power of a great story. Even in the darkest and loneliest times, a good story always has the power to spread love, joy, and laughter. The illustrations are sometimes dark, but always charming; sometimes mystical, but always captivating. *Watch the short film based on the book to see the illustrations literally jump off the page!

Like many great children’s stories, The Fantastic Flying Books of Mr. Morris Lessmore is so much more than a book.

It is an award-winning short film,

and if you take the time to read the story or watch the film,

I think you will agree,

the story lives beyond its pages.