Book Review of The Shining (1977 throwback!) by Stephen King.  Published by DoubleDay.

My favorite kind of Science Fiction is the kind you can believe; the kind that would only require a slight twitch of the universe or the opening of a new connection in the human brain. In 1977, Stephen King balanced that believability with true terror in his novel, The Shining. It captured a vast, wide-eyed audience that couldn’t wait to turn the page. The story captured an even larger on-the-edge-of-their-seat audience when the novel was turned into a film in 1980. Why did the story enthrall and terrify such a vast audience? Because the terror is believable.

After reading the Shining less than a year ago, it immediately jumped onto my list of favorites. The writing incorporates a unique style, the story is one of King’s best (not only in my opinion, but consistently considered so by critiques and fans), and there are just enough twists in the world to keep you unaware of what is to come.

The setting of The Shining is based on a real location, the Stanley Hotel in Estes Park, Colorado. Getting trapped in such a hotel by snow higher than your head may have been a stretch if it was an accident but the Torrance family of the novel chose to stay there for the winter. When the father, Jack Torrance, took on the job as caretaker of the hotel, he and his family agreed to isolate themselves in the hotel for the entire winter.

Danny Torrence, an 8-year-old boy with supernatural powers is the focus of the story. And yes, he does have unrealistic abilities such as mindreading and sending mental messages to a man across the country. But those stretches of reality are balance by smaller, more believable talents. For example, is it so unlikely that an 8-year-old boy has an imaginary friend? Or that he become frightened when a fire hose seems to turn into a snake and chase after him? Is it hard to believe that a man who was once an uncontrollable alcoholic with a quick temper could go a little crazy once being cooped up in an abandoned hotel for months. And, as an avid watcher of Ghost Adventures, I don’t doubt for a moment that most historic hotels are haunted, especially ones that have seen as much violence and death as The Shining’s Overlook Hotel.

There are supernatural happenings in The Shining that do stretch the imagination, but surrounded by a realistic setting with realistic characters, it did not require any sort of leap for me to believe the supernatural. Making a young boy the witness of all these terrifying events also makes them more believable because children are argued to 1) see certain “realities” that adults have long ago pushed into their unconscious and 2) children are more easily frightened, making the scary seem that much more terrifying

That fictional 8-year-old boy turns into a man!

The reason I chose to write a book review on a story I read so long ago was in preparation for the sequel. Doctor Sleep, a 2013 release by King, features the same 8-year-old boy who was tormented by the horrors of the Overlook Hotel. Only now, he is a recovering alcoholic in his 40s who has learned to tame his supernatural powers…until he needs them. My book review on Doctor Sleep will be coming soon! And once again, King does not disappoint.

A few of the many book covers and images associated with this famous story: 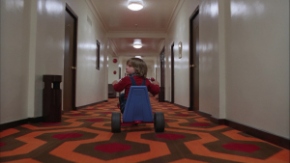 (I do not claim any rights to these photos.)